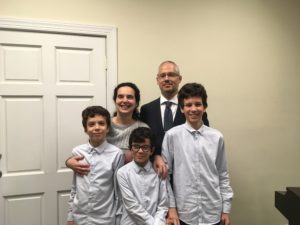 Tiago Oliveira has been married to Marta since 2001, and they have three boys: Rúben, David, and Tiago. Tiago and Marta were raised in Christian families and the Lord saved them at an early age. After more than a decade of serving at Igreja Evangélica Baptista da Graça in Lisbon, Portugal, Tiago moved to Mississippi for additional training to return to Portugal to continue serving as a pastor and be involved in Seminary training.

Tiago is a graduate of Reformed Theological Seminary, Jackson (MDiv), and is currently pursuing a PhD in Biblical Studies at Puritan Reformed Theological Seminary in Grand Rapids. Tiago and his family were members of Grace Baptist Church (GBC), Jackson, Mississippi, for almost 8 years, where Tiago also served as one of the elders. At the recommendation of GBC, Tiago was approved as an RBNet Endorsed Missionary. GBC sent the Oliveiras to Portugal, where Tiago now serves as the Senior Pastor at First Baptist Church of Lisbon (a church revitalization work) and leads Martin Bucer Seminary Portugal. Tiago also serves the Portuguese Bible Society as an exegetical consultant and revisor of Portugal’s most used Bible Translation.