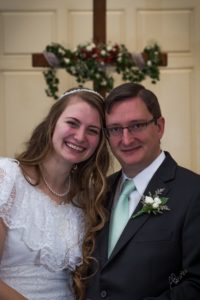 Ottavio grew up in a very devout Roman Catholic family. His mother prayed that he would become a priest. The Lord brought several evangelical believers into his life, but he remained adamant in his devotion to the Roman Catholic church. Yet he was searching for the truth and even went to six different priests but none were able to satisfy him. The Lord brought an evangelical friend into his life. Ottavio decided to read the Bible to disprove this friend, but Ottavio found no support for his beliefs. His friend invited him to a conference where he heard the gospel and the Lord saved him. He soon became very involved in teaching but realized his need for further training. As a result he first went to the Netherlands for seminary education and then finished in the United States. During his education he got experience in both Italy and the USA in church planting and pastoral work through internships. He married Heidi in December 2019 and they are expecting their first child.

Heidi grew up going to a conservative reformed church. A combination of things during her teen years caused her to realize she was not converted. Her sister introduced her to Paul Washer’s preaching. Although convicted by his preaching, she still was clinging to her doctrinal knowledge, and outward keeping of the law, for assurance. When she was about 17, a camp counselor looked her in the eye, and asked, “Do you know Jesus?” She said, “yes” but she felt such a weight on her heart, and was very unsure and unsettled with her response. When she was about 18, she acknowledged that she was not saved. While reading through 1 John she was convicted and realized that she did not love God. Then just a week before her 19th birthday while reading through Ecclesiastes everyday she asked her sister what the preacher was talking about. Her sister said he was talking about the meaningless life of apart from Christ. The Lord used that to open Heidi’s heart and give her a true peace as she saw herself as a sinner in need of a Savior who died for her.