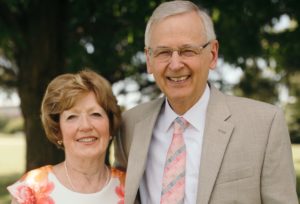 Gordon Taylor received his B.A. from Cedarville University in Speech and Pre-Seminary Bible in 1966. He received the M.Div. from Grand Rapids Baptist Theological Seminary in 1969. He was the pastor of two different churches. He served at Calvary Baptist Church in Greene, Iowa from 1969 to 1975. He served at the Sycamore Baptist Church near East Moline, IL for 33 years from 1975 – 2008. While pastor at Sycamore he led the church to adopt the Second London Baptist Confession of Faith. In 2008, he was called to be the Coordinator of the Association of Reformed Baptist Churches of American and served for 7 years retiring in 2015. Since he retired he helped form the Reformed Baptist Network where he now serves as the Network’s voluntary Coordinator.

He is married to Rayna and they have 4 married children and 15 grandchildren.

Back to About Page