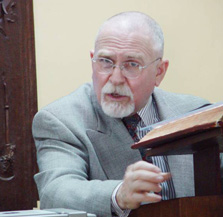 Baruch was born on December 31st 1943 to a Jewish family in Boston Massachusetts. His mother, younger brother and he immigrated to Israel in 1953, where he was converted to Christ while serving in the Army in 1963. He worked with Christian Witness to Israel from 1974 to 2005 and pastored Grace and Truth Christian Congregation in Israel from its founding in 1976 until the age of retirement at the end of 2008. He is presently engaged in a writing, teaching and preaching ministry in Israel and abroad. He and Bracha were married in 1968 and live in Gedera, Israel. They have three daughters, all married and presently living in the USA, and two foster daughters, both of whom are married, one lives in Quebec, Canada, and the other in Israel.​

Alternatively, you may send a check to