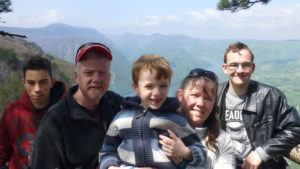 In 2013, Dwayne and Kimberly Baldwin went to Serbia, a Republic of former Yugoslavia, with the purpose of re-establishing the Baptist Theological School in Novi Sad, Serbia. The school opened its Bachelor program in 2015 and currently has 32 students enrolled. BTS is operated in a modular format throughout the year. Dwayne and Kimberly work with the Serbian Baptist Union, and were appointed to this work through Training Leaders International.

Dwayne was converted in Evansville, IN in 1990, and Kimberly was converted as a youth in 1979. They have 5 boys, 4 of whom are adopted from E. Europe. Alex (1994) currently attends Murray State University. Aidan (1998) attends Grace College in Winona Lake, IN. Graham (2001), Andrew (2001) and David (2009) are in Serbia with their parents, where they attend school and are valuable in facilitating ministry to youth.

Serbia has a population of 7 million, and self-proclaimed Evangelicals number only about 5000 (0.1%)! Of these, 2000 are Baptists in about 70 churches, each averaging 15-25 people in attendance. In the face of decades of wars and communism, the Lord is providing the knowledge of His truth to a new generation of Serbians.

Dwayne and Kimberly are sent out of Heritage Baptist Church in Owensboro, KY.

If you wish to support the Baldwins financially, click here, then under “Giving Type” please choose “Missionary Support – Baldwins”.  Follow the instructions to set up an account so that you can receive giving statements for taxes.
Note: Credit card transactions charge an additional fee of 3%. Please consider increasing your donation to cover that charge.

If you prefer to pay by personal check or recurring bank checks (bill pay),
please send those to:
Heritage Baptist Church Missionary Support
3585 Thruston Dermont Road
Owensboro, KY 42303
Include a note “Missionary Support – Baldwins” along with your payment.