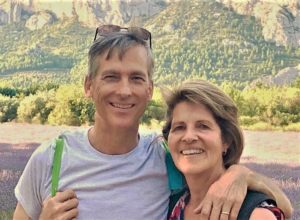 David Vaughn came to faith in Christ in 1978 at the University of Georgia through the witness of members of Campus Crusade for Christ. As David grew in his spiritual life, he soon became persuaded that he should devote his life to the work of spreading the Gospel. After graduating from university, he applied for a one-year overseas evangelism project with Campus Crusade in Ivory Coast, West Africa. He ended up serving there for six years. David learned to speak French fluently and gained experience in cross-cultural adaptation and ministry.
In 1987, while attending a Campus Crusade leaders’ conference, David met Nicola Fuller, a South African who had often thought of going to French-speaking Africa as a missionary. David had recently become convinced of the doctrines of grace and, through David’s influence and her own study, Nicky also came to embrace these truths.

In 1989 David came back to the USA for a three-year term in order be Associate Pastor at Heritage Church in Fayetteville, Ga and to receive additional theological training before going back to the mission field as a church planter. In June,1989, David and Nicky were married and were blessed with a daughter, Caroline, in February, 1991. Because Nicky had Chronic Fatigue Syndrome (a disease which weakens the immune system) going back to West Africa, a malarial zone, was impossible. So the Vaughn’s burden for the French speaking world turned them to consider France.

In October 1991, having been set apart and sent by Heritage Church, the Vaughn’s went to Chalon-sur-Saône in the Burgundy region of France where they labored for seven years in church planting work. During the years in Chalon, the 1689 Confession was translated and published in French, a literature stand ministry was begun and an annual Reformed Baptist Family Camp was started.

In March of 1999, they moved to Grenoble, France to begin a new church-planting work. Grenoble is a city of over 400,000 people, the 10th largest metropolis in France and home of four universities, and important scientific research. The work began in March 1999 with one French family. A number of French men, women and young people came to Christ over the next 13 years of church planting in Grenoble, and in July 2012 the Vaughn’s left the church with a regular attendance of between 40 and 50 people, to plant a new church. Three men from the Grenoble congregation had been called to the eldership and led the church for 6 years as they searched for a French pastor with Reformed Baptist convictions (a very rare commodity in Europe!). Joël Favre was called as pastor in 2018. During the Vaughn’s years in Grenoble, an annual conference for university students was started as well as a book ministry which now sends Reformed books to about 110 broad evangelical pastors in France and Switzerland every year and has been for roughly 7 years, furnishing them with 28 carefully chosen Reformed books. Under Joël Favre’s leadership the church in Grenoble has seen very encouraging growth.

The Vaughn’s next moved (July 2012) to Bouc Bel Air, a suburb town to Aix-en-Provence, a city of 140,000 people in the south of France with 60,000 university students. They began a church plant with a French couple and now have a small group of about 16 people attending Sunday services. David is also teaching at the Belgian Bible Institute in Brussels where he gives courses on Romans, Preaching, and Biblical Piety. Additionally, he makes annual trips to West Africa to train pastors in Burkina Faso and Ivory Coast.

Donations for David Vaughn can be mailed to: