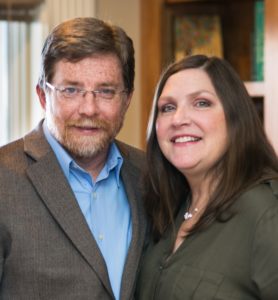 Sam grew up in Argentina and faithfully served alongside his parents for many years. He returned to the United States to attend college in 1981. It was there that he met his wife, Carita. Shortly after marrying, Sam and Carita moved to Miami to serve at the International Bible Baptist Church, ministering to both the English and Spanish-speaking communities. After nearly eight years of service in Miami, they were sent to Argentina. In 1997, Sam led a team that began Centro Crecer Church in downtown Córdoba. God has blessed the church and five additional works have been planted. With the growth of the church also came the need for theological education. In 2006 Seminario Bíblico William Carey was begun. Originally set up as a virtual campus, SBWC now has five study centers in the Americas and is reaching students in 8 countries.

Sam has a Master’s degree from Reformed Theological Seminary and is finishing a PhD from Southern Seminary.

Sam and Carita have three adult children and four grandchildren.

If you wish to donate to Sam Masters, you may click the below button to donate.

Give to Sam Masters Here

***If there is a donation specifically for the seminary (Seminario Bíblico William Carey) or a special project, please clearly note the intended use of the funds, and send to:***