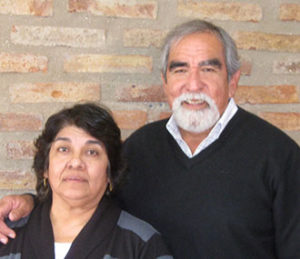 Jorge’s long term pastor and mentor, Jim Adams wrote: “We rejoice with the assurance that his suffering (multiple medical complications) is ended. His labor is finished, and he is at rest in the Lord, awaiting with all the saints who have gone before us, the great Day of the Resurrection. Jorge loved the Lord and loved the Lord’s people—especially loving and caring for that little flock in Carlos Paz (ARG) over which the Lord made him a shepherd.

He pastored that church with zeal and faithfulness since 2008. Please be in prayer for his wife, Bilma, their four children, and for the church in Carlos Paz who mourn the loss of the man who loved and served them. We rest and rejoice in the hope of God’s promises.”

“In my mind I can still see Jorge singing folk songs of his beloved Argentina in the courtyard at Cornerstone. The Lord used Jorge’s singing and preaching in Spanish at Cornerstone to spur us to love and pray for Argentina. May God use the memory of Jorge’s devotion to Christ and efforts to make Him known there give us all a fresh commitment to send the gospel into Argentina.

Jorge’s great love for Bilma, his wife of 48 years, came through in almost every phone conversation over the many years. He loved and prayed for their four children: two sons, Claudio & Ivan, and two daughters, Veronica and Gimena. What joy he had in the grandchildren!

Having been in evangelical churches for most of his life, Jorge was overjoyed when he grasped the doctrine of God’s free sovereign grace. He was grateful for the companionship for some years of missionary Don Donell and, though feeling inadequate, accepted the charge of the small congregation that had formed. God gave Jorge a pastor’s heart, and he came to delight in preaching the marvelous gospel truth in the church and to the community by radio. He loved to disciple and to shepherd the needy and wayward. Some of Jorge’s last written messages gave thanks for the fellowship, teaching, prayers and support from RBNet and Cornerstone Church.

May we remember Pastor Jorge Molina, who has gone on before, as one who spoke God’s Word, and consider his way of life and imitate his faith, even as we look to our eternal Lord Jesus Christ, Who is the same yesterday and today and forever (Heb. 13:7-8).

We trust that the work will go on, perhaps somewhat under the leadership of a former student there in nearby Cordoba—Marcelo Brondo—a prince of a man, with whom Jorge had recently bonded and was hoping to co-labor.”

All donations will now be directed to support the church in Carlos Paz.

Donate to the work at Carlos Paz