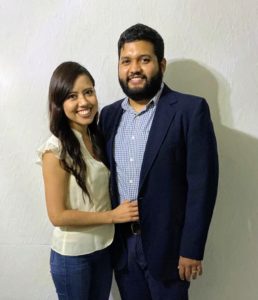 Raul Torres is one of the two primary leaders/teachers with Iglesia Bautista Pacto de Gracia in Juarez. Raul was ordained on September 13, 2020 as a pastor of IBPG. IBPG was established as a church plant of Santa Teresa Baptist Church, Santa Teresa, NM, in 2016 (David Hendrickx, pastor).

By God’s grace, the church is now in the process of receiving a second generation of members, celebrating baptisms, and preparing to ordain their first deacon.

Raul Torres was born in Chihuahua, Mexico. Son and grandson of pastors, he had a strong ministry and missional influence at an early stage of his life. The Lord saved him when he was 8 years old. While he was in college, Raul was introduced to the doctrines of grace and compelled by a desire to see the gospel reach difficult places, he moved with his friend Julio Carrillo to Chiapas, Mexico to plant a church through Iglesia Bautista El es la Roca. Later, he moved to the mountains in Chihuahua where he also served as a missionary.

In 2015 he met his wife, Lidia; they’ve been happily married for four years. Lidia has been diagnosed with Lupus. She is, however, doing very well and is active with what will likely be a lifelong health condition. Raul and Lidia are both charter members of Iglesia Bautista Pacto de Gracia.