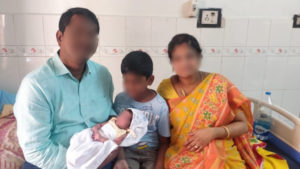 Pastor S.B. is a pastor/teacher, evangelist, and trainer of indigenous pastors serving in the Indian state of Andhra Pradesh. Christianity makes up only 2% of India’s religious demographic, Hinduism being the predominant religion. He focuses on fishermen, Dalits (untouchables), tribal people, and less-privileged people.  He is married with two children ages 8 and 1.

Pastor S.B. grew up in a Christian home and testifies that God was at work in his life as a young boy. He sensed a call to ministry early on, but he describes 1995 as a turning point (the year he turned 20).  His internal burden for ministry was met with an external confirmation from pastors.

In addition to faithfully pastoring a local church in his village, he is committed to establishing a central location in his area that would minister to orphans, widows, and also, to train pastors. He has extensive connections and conducts numerous evangelistic meetings in neighboring villages across a 150-mile radius of the area.

Similar to the Apostle Paul, Pastor S.B. has a burden for the lost and a zeal for the Gospel. His love for our Lord has kept him pressing on despite persecution, natural disasters, and violent opposition from all sides.

Please consider being a partner with this important work.